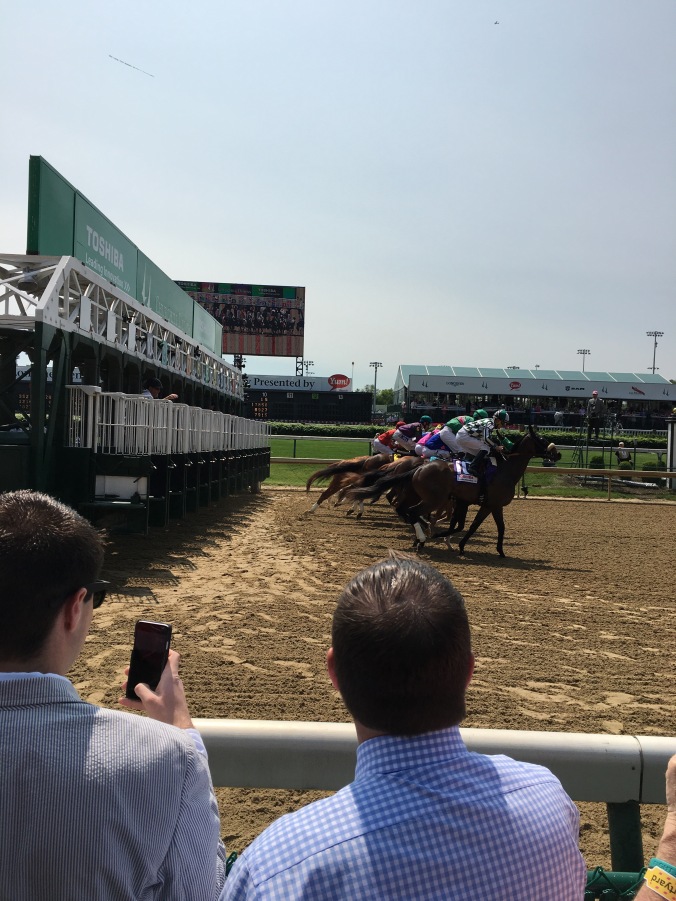 Got an invite from Kool Gregg a couple weeks ago to join his A+ crew at the Kentucky Derby. Haven’t been to the Derby since 1995 for Ratt’s bachelor party, so absolutely had to be here. Killer time so far I guess.

But after the first day, I’m coming around to Kool’s way of thinking.

So Kool gets 12 tickets in the Courtyard section, right down on the track by the finish line. Inside the clubhouse behind the seats are several bars and a betting window, and a buffet. Here’s the buffet. 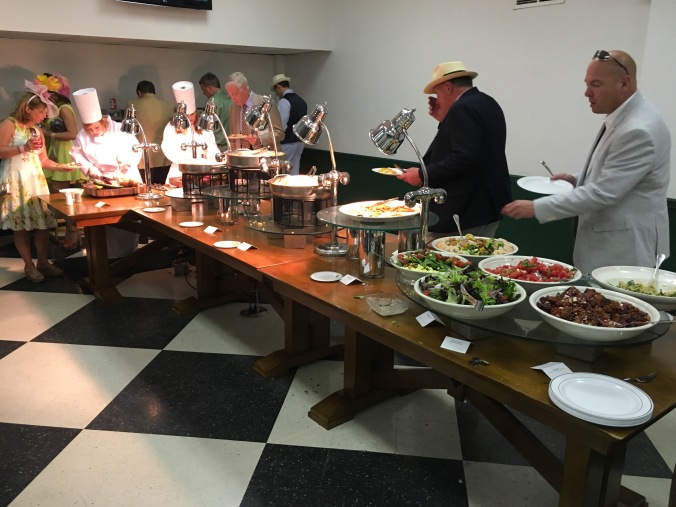 The fun part is the drinks don’t cost nothing. Well, Kool is quick to point out, they cost us a helluva lot, so probably more accurate to say the drinks are already paid for. I take the position that after they are paid for they are free. But that’s just me. 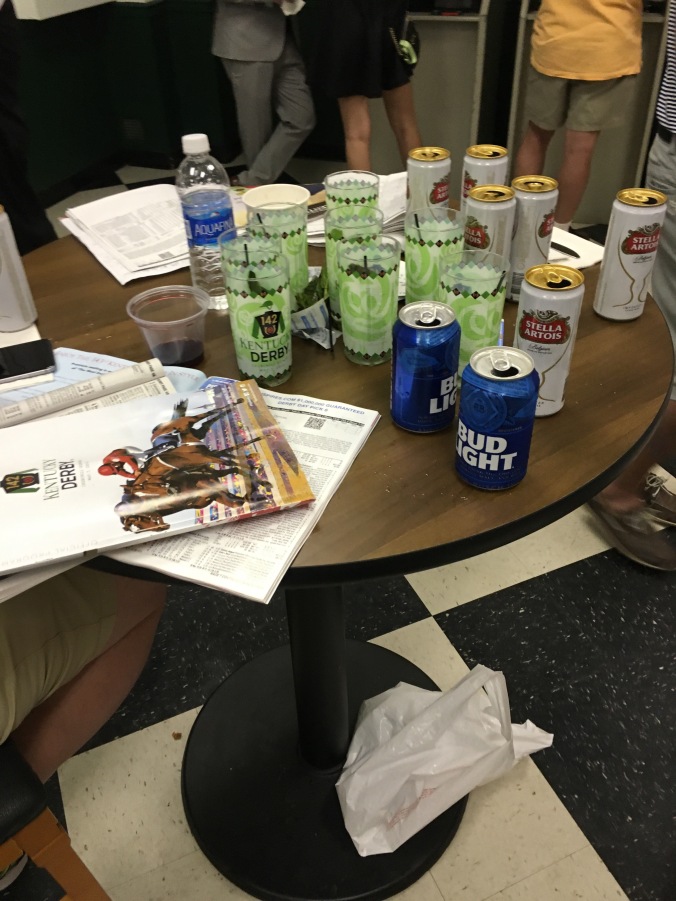 More set up later, but we got a new friend. Savard or something. He used to be an ice skater. 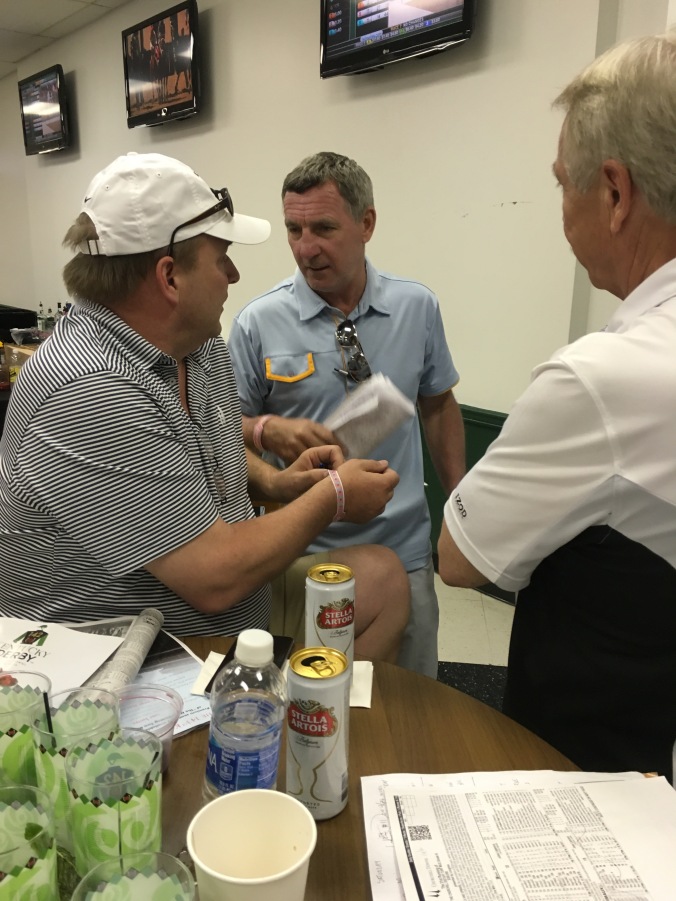 Ok where was I. So we did the Kentucky Oaks yesterday.  The Oaks is like the little sister of the Derby, and that is very apt because only fillies (young female horses) run in the Oaks. Got here at 9:30 or so. Hung out and bet on the races all day.  Other than everyone pretty much losing their ass, it was a killer time. 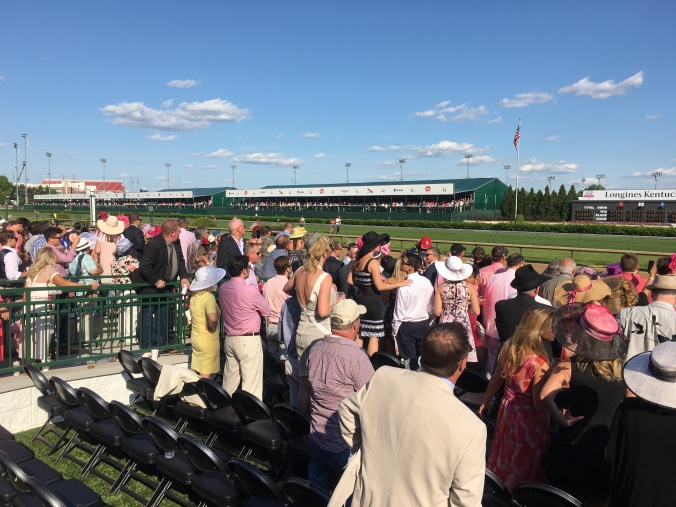 But we stayed to the end. Figured out a way to lose even more money on the last couple races.

Then we stumbled around the neighborhood outside Churchill Downs making friends.

Fun competition at this bash. Wager money on which one of these devices gets to the bottom of the ramp first. 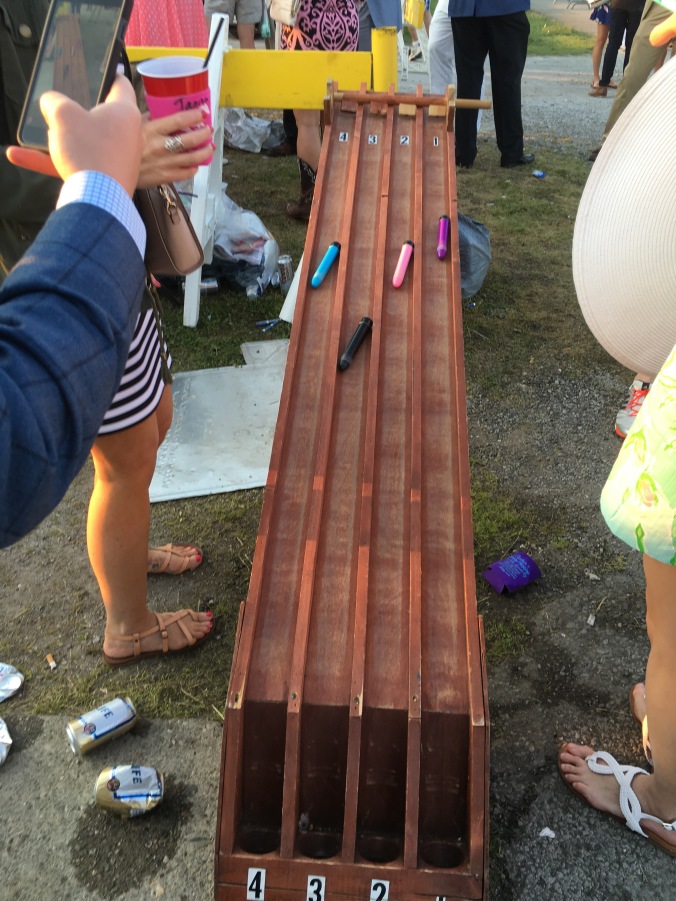 Hayes got a burger at the Backyard BBQ.

Ran out of buns, apparently. Kool lost his voice, so he had to talk like the mutes. 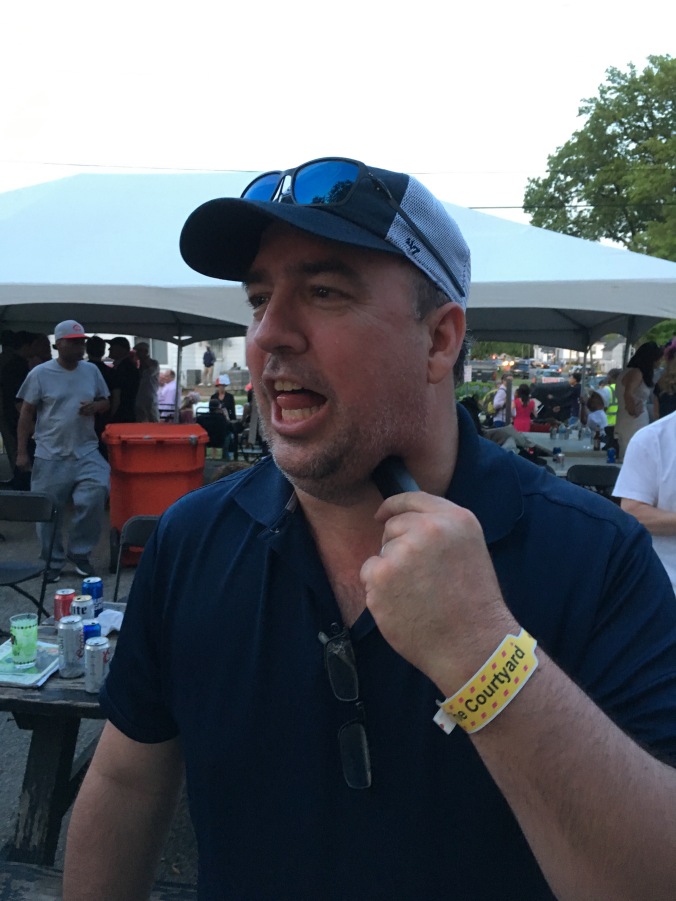 So that was a fun time to start things off at the Kentucky Oaks. And in case you are confused, like I was, the KY Oaks is the event, not the location. Still at Churchill Downs, but all the races the day before are called the Kentucky Oaks. Only female horses run at the Oaks, which is a difference I guess.

So somehow when we got here Mongo secured a sweet chair in the betting room.

Only chair in the room like that, and we are all devoted to keeping it.  If he goes to the bathroom or bet, I get to sit in the chair. Can’t lose it.

Let’s be honest here. I don’t know the first thing about horse racing. And I’m a gambler from way back, but just don’t know all the ins and outs.  Sure, I know win lose place or show, and exactas and trifecta, but that is about it. These guys are doing “wheels” and other shit I’m trying to wrap my mind around.

Hockey guy just took over Rick’s chair. Gave it to him out of respect.

Picked a winner in the fourth race. Res Ipsa. If you have studied Latin, and I haven’t, but I went to law school, so I know Res Ipsa means “The thing speaks for itself.”  So obviously this was a code that the horse would win.

I made up all those scratches on the horse racing form. Horse racing guys will think it is funny, maybe.

Just started raining kinda heavy. Could be a factor.

These two guys tried to stay separate all day, but I got em.

No one came up and told me that horizontal stripes are in.

So NyQuil won I guess.

Hanging out for the later races after the main event. 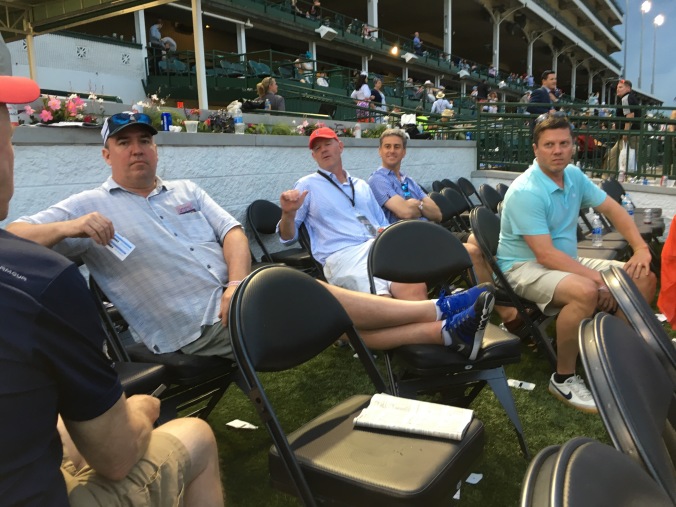 Right before the last race, some serious clouds rolled in.  They unleashed on our run back to the vehicle.

And then the bars.

Hayes took over the band at the Bearnos.

On Sunday, Hayes and Uncle Jim caught this sweet ride home to Albany with Hayes’ buddy and his wife.  Luckily they were licensed to transport corpses. 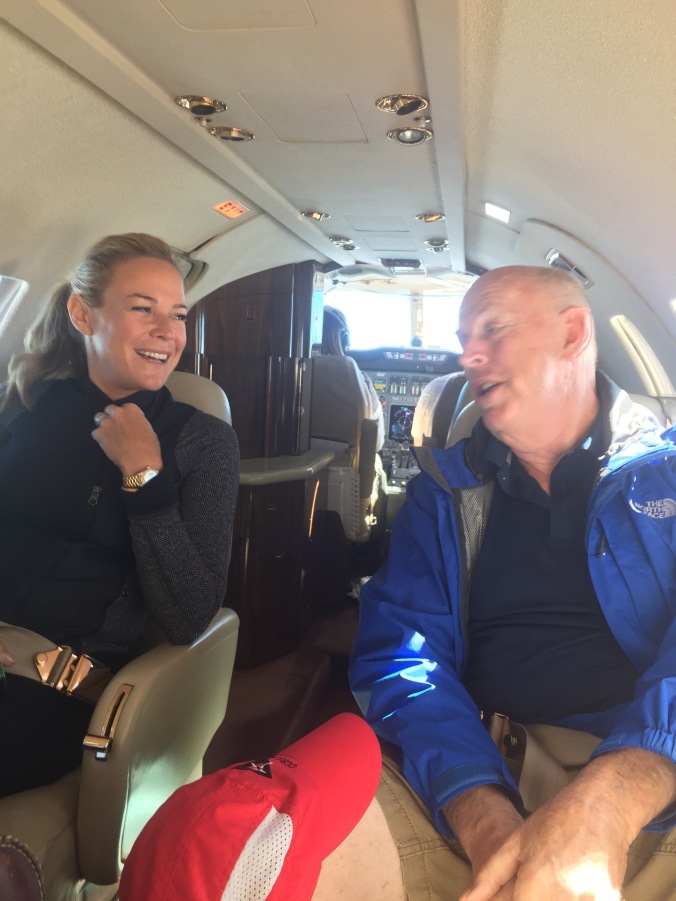 Mongo declared a caption contest for the second picture of Uncle Jim and the wife.  I won with “Thanks for the ride on your flying machine.”

Kentucky Derby was a pretty good time, I guess.