Just a quick heads up on the latest meme that is breaking the internets–Dat Boi!!!  If you see a picture of a frog riding a unicycle, that frog has a name, and the name is “Dat Boi.”

Noting his “relaxed demeanor” and “imperturbable mellowness,” New York Magazine has declared Dat Boi the Year’s Best Meme So Far, see here.   Dat Boi is very cool, apparently, and the kids are inserting his picture all over the place in tweets, memes, posts, etc.  Stay woke for Dat Boi, because he is the hot thing at the moment.

Here’s the fun part, and you guys need to be ready for this.  Dat Boi’s arrival on the scene is typically announced with a greeting, such as “Here come Dat Boi!!”  But the Dat Boi meme also has a call-and-response component.  After Dat Boi is greeted, the greeting is acknowledged, very casually, but with a bit of surprise, with “oh shit waddup.”

So, if you see Dat Boi, be sure to acknowledge him with a “Here come Dat Boi,” or a “There’s Dat Boi,” or even a dadly “I’ll be goddamned if it isn’t Dat Boi!”  First level cool to even know that.  But if you hear someone else acknowledge Dat Boi, and can then pull an “oh shit whaddup” out of your ass, we would probably retire your dad jersey.

Anyway, carry on, and heads up for Dat Boi! 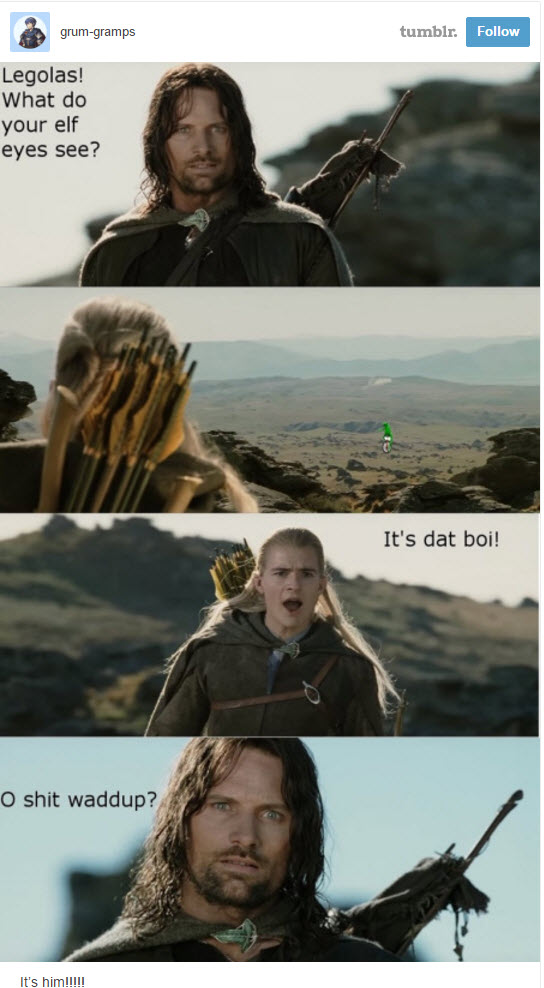